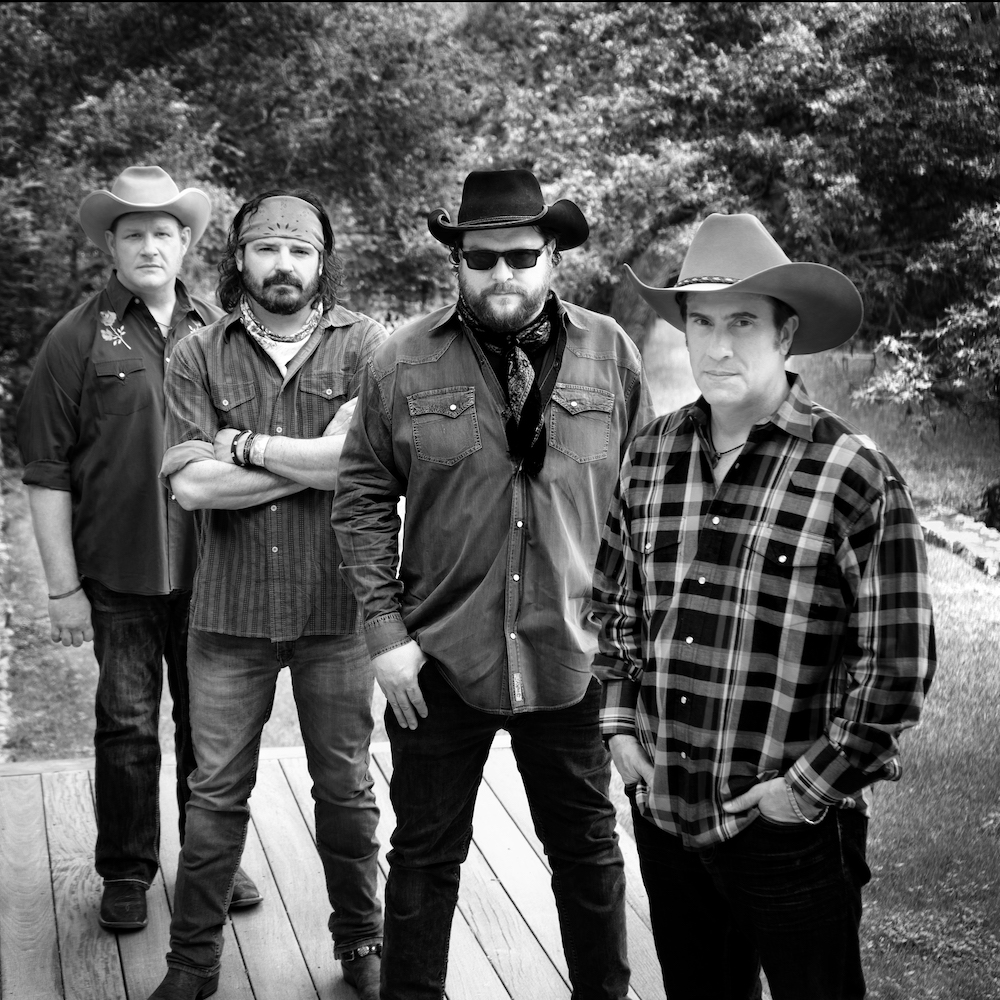 For nearly 25 years, Reckless Kelly has graced the musical landscape with a high-powered form of Americana, equally rooted in raw passion, refined musicianship, and gritty authenticity. With the dual release of two new albums—American Jackpot and American Girls—the Idaho-bred band presents a beautifully detailed portrait of their beloved country, turning their nuanced songwriting to its many glories and tragedies. While one batch of songs centers on slice-of-life storytelling and the other explores the complexities of human connection, the collective body of work unfolds with a profound and often eye-opening attention to the subtleties of American life.
“I’ve always wanted to write an America-themed record, but not in some super-political or ‘rah rah rah’ sort of way,” says Willy Braun, who co-founded Reckless Kelly with his older brother Cody Braun and drummer Jay Nazz in 1996. “I wanted to tell stories of everyday life, and the kinds of things that nearly everybody experiences growing up in this country.”

Although Reckless Kelly initially intended to make just one album, the project took on a life of its own once they headed into the studio. “I wanted to produce this one by myself, just to try that out, and I made sure to book plenty of studio time to get it done right,” says Willy. “We ended up moving along really fast, so I pulled out a few more songs and figured we’d end up using them down the road. Before we knew it, we had enough material for two really good records.”

The follow-up to their acclaimed 2016 album Sunset Motel, American Jackpot and American Girls embody a wonderfully eclectic sonic palette, achieved with the help of V.I.P. guest musicians like GaryClark Jr. and Charlie Sexton, along with several members of their own legendary family (including Uncle Gary Braun on chromatic harmonica and their father Muzzie Braun on lead and harmony vocals). Recorded at Arlyn Studios in their adopted hometown of Austin, both albums abound with an unbridled vitality—an element that has much to do with the band’s deliberate decision to keep pre-production to a minimum in order to harness the magic of in-studio spontaneity. “There’s something incredible about the first time you play a song really well together, and we don’t ever want to waste that take on the rehearsal room,” Willy notes.

Throughout American Jackpot, Reckless Kelly joyously examines what they most cherish about their homeland, exalting everything from the thrill of mule-riding through the Grand Canyon to the country’s singular potential as a cultural melting pot. At the same time, the band never shies away from calling out forces that threaten America’s character. To that end, the album is bookended by two piano-driven tracks with lyrics lifted from the Emma Lazarus poem inscribed at the Statue of Liberty: the full-hearted and hopeful “North American Jackpot,” and “Goodbye Colorado #3” (a quietly impassioned response to anti-immigrant rhetoric). “It seemed to make sense to open and close the record with similar themes, where one song’s about people coming to America, and the other’s about people getting kicked out of this country they’ve lived in forever,” says Willy.

Elsewhere on the album, Reckless Kelly conjures a distinctly American spirit through their artfully executed musical references—the heavy-hearted Tom Petty homage “Tom Was a Friend of Mine” channels the elegant simplicity of its subject’s songwriting, while Bukka Allen’s ballpark-organ melodies lend a certain whimsy to “42” and its tribute to the great American pastime. And on songs like “Thinkin’ ‘Bout You All Night,” American Jackpot celebrates the splendor of the country’s most majestic spaces. With its finely rendered images of rolling fog and sun-streaked pinyon pines, the sweetly wistful track came to life in three separate states: a park called Garden of the Gods in Colorado, a cabin porch in California’s Sonoma Valley, and a lodge on Oregon’s Klamath Lake. “We nearly put that one on the American Girls album, but to me it’s a song about the vast diversity of America, and all the little geographical differences in the places it was written,” Willy points out.

Though each album encompasses endlessly unpredictable moods and textures (thanks in part to Eleanor Whitmore’s lush string arrangements), American Girls finds Reckless Kelly embracing an undeniably playful energy. Sparked from a pair of pink sunglasses left on the dashboard of Willy’s truck, “Miss Marissa” wanders into the unlikely territory of ELO-esque symphonic pop—a sound worlds away from “Any Place That’s Wild,” a Marty Robbins-meets-Sergio Leone duet with singer/ songwriter Suzy Bogguss. “Instead of using tambourines on that one, we spent about two hours one night stomping around the studio with spurs on,” Willy recalls. Meanwhile, “Don’t Give Up on Love” emerges as a bouncy rock-and-roll number with roots in classic Springsteen and the Ronettes, and the album’s title track offers up a swaggering ode to the greatest girls in the world.

One of many songs penned with Idaho-born singer/songwriter Jeff Crosby, “I Only See You With My Eyes Closed” provides one of American Girls most haunting moments, its intensity heightened by Sexton’s ethereal guitar work. “There’s one verse about waking up and not being able to remember what you were dreaming, but the feeling of the dream is still lingering,” says Willy. “There’s three different guitar parts drifting in and out on that song, and it’s meant to be the musical equivalent of drifting in and out of a dream.” Another collaboration with Crosby, “Lonesome On My Own” matches Geoff Queen’s luminous steel-guitar tones with lyrics encapsulating a painful self-awareness (e.g., “Maybe she’s better without hangin’ from my love like a marionette”). But on “Lost Inside The Groove,” American Girls turns impossibly jubilant, bringing swinging rhythms and a fiery guitar solo to the song’s expression of lovestruck adoration. “Shawn Sahm sent me that song idea, so we worked it out and had him come down and play guitar and Vox Continental organ,” explains Willy, referring to the son of Sir Douglas Quintet/Texas Tornados founder Doug Sahm. “It had this real Tex-Mex feel right off the bat, and I think they’re going to dig it in Texas.”

In the writing of Reckless Kelly’s latest material, Willy took several trips up to his desert retreat in Idaho, a spot near the Brauns’ White Cloud Mountains hometown. Though the two brothers first forged their musical partnership back in Idaho, they later decamped to Bend, Oregon, where they quickly linked up with Jay Nazz. Soon after forming Reckless Kelly (whose name nods to the legend of Australian highwayman Ned Kelly), the three musicians relocated to Austin and rounded out the lineup with bassist Joe Miller and guitarist David Abeyta (who exited the band after the release of Sunset Motel). Over the years, they’ve delivered a string of critically lauded albums, including 2011’s Grammy-nominated Good Luck & True Love and 2013’s Grammy-winning Long Night Moon.

With the release of American Jackpot and American Girls, Reckless Kelly hopes to lead listeners to thoughtful reflection on their own experience of living in America, and possibly invite a certain purposeful nostalgia. “I’d really love for people to listen to this record and remember,” says Willy. “I hope ‘42’ makes them remember playing ball when they were kids, and I hope ‘Tom Was a Friend of Mine’ makes them think of hearing a Tom Petty song and feeling like he was your buddy, even though you never met him. Mostly I just hope these songs remind them of all the different aspects of growing up in America, and feeling so lucky to live here.”