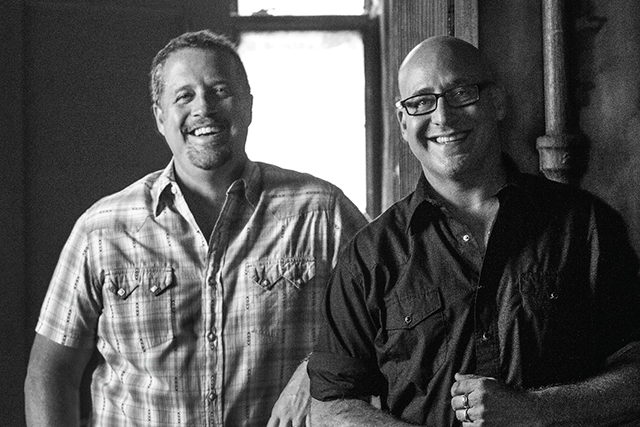 Ken Block and Drew Copeland, best known as two of the five members of the platinum-selling southern rock band Sister Hazel, will bring their wildly successful tunes to select cities for intimate, “miss it and miss out” acoustic shows, reminiscent of their earlier performance days when they canvassed the club and coffee shop circuit as a duo from Gainesville, Florida.

While performing over 100 shows each year with the band, Block has long been praised by both media and fans alike for his powerful and emotion-evicting voice which is both unique and instantly recognizable thanks to a string of radio hits including “All For You,” “Change Your Mind,” “Happy,” “Champagne High,” and others. Over the last 15 years, he and the band have been prolific in the studio and at live shows.

Similarly, Copeland is also a celebrated songwriter and vocalist, in 2004 he released a solo album, “No Regrets.”  An avid sports and music lover, Copeland has been honing his songwriting skills in Nashville, Tennessee over the last decade with some of country music’s finest tunesmiths.

Sister Hazel is known for their personal approachability and fan-friendly events including being Co-Founders of THE ROCK BOAT, founders of the annual Hazelnut Hang, and for starting their own “Lyrics for Life” charity and raising nearly 1 million dollars for childhood cancer research and family support programs. As University of Florida alumni, Copeland and Block also returned to their alma mater to be the first-ever celebrity hosts of the world’s largest student run pep rally, Gator Growl.

Sister Hazel songs have appeared in many motion picture soundtracks over the last decade including 10 Things I Hate About You, Major League: Back to the Minors, The Wedding Planner, Clay Pigeons, American Wedding, and Bedazzled.

As two of our generations’ most engaging and prolific songwriters, “The Ken and Drew Show” will take fans through intimate acoustic performances of Sister Hazel favorites, a few “B sides” and deep cuts, and new material that writers have called “some of the freshest new music to come out of Music City”. No evening with Ken and Drew would be complete with out lots of laughs and some crafty storytelling, all delivered using with their well-known wit.  These shows are truly “miss it and miss out”.